The 10 Best Wireless Routers 2022 for Gaming and Streaming

If you are in need of a good wireless router for your home or workplace, but you don't know which router to go for, then look no further than this article. We will help you pick the best wireless routers for your specific requirements.

In the age of the internet, new smart devices such as smart TV, smart home, smartphone, 4k gaming, and tablets are becoming part of our life. And you need a good router to keep up with increased demands for better and faster Wi-Fi connection.

Without a good router, you won't get the best of your internet connection. But finding a good router is a daunting task because there is too much technical information to know about routers in the market today.

But, worry not, we are here to save you the trouble of figuring out all the technical jargon. To figure out which router will give you the most bang for your buck, we have compiled a list of top ten routers for different circumstances. 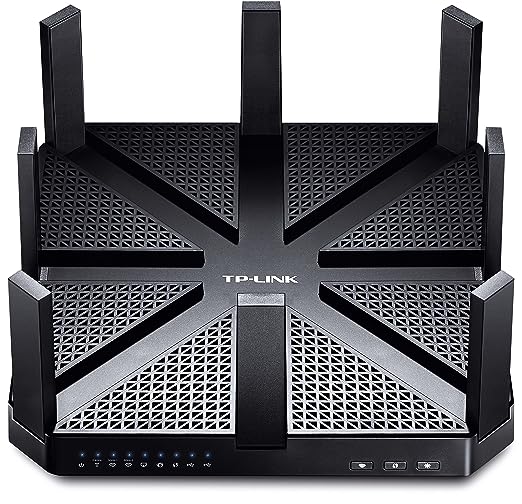 If you want speed, then TP-Link's AD7200 will meet your expectation. It has the lastest wireless technology to handle anything that comes its way. This router is one of top rated wireless router out there.

Not just it has the top speed to meet your needs, but also it is future proof. It comes with the latest 60GHz capable of 4600Mbps, which is about four times faster than the gigabyte ethernet cable. Even though there is currently no device operates on 60GHz, different tech companies have agreed to use it sooner rather than later. 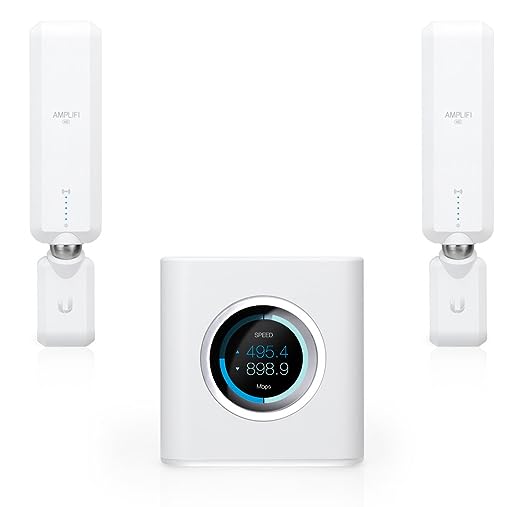 More often than not consumers are struggling to connect to Wi-Fi in certain areas of your home or office, then probably it is time to change your router with this router with mesh technology.

Mesh technology has been in use by military, hospitals, commercial multistoried building, and other commercial applications. Not just it works for Wi-Fi, but also it works with other radio signal technologies.

Mesh Wi-Fi technology works by repeating the signals of your router to a different location where the mesh is located so that you get coverage anywhere. So, for example, if you can't get Wi-Fi in your home office, put a mesh in your home office, and you are covered by Wi-Fi. 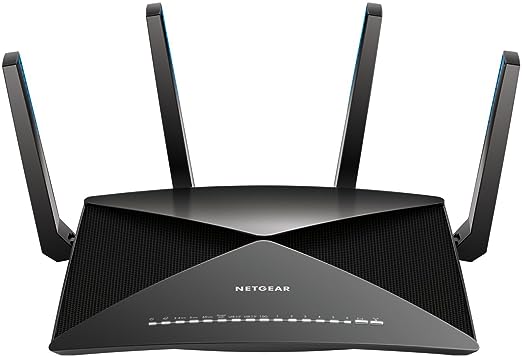 If you watch the 4K video and play 4K games, then you will love Nighthawk X10 7200 because it is made to handle ultra-smooth 4K data. Moreover, it is one of the most praised routers in the market.

With Preciese Beamforming technology, it can cover your big house easily without the need for any mesh network system. Why waste your money on mesh networking when this router will do the job.

The powerful 1.7GHz processor and built-in Plex Media Server to handle video and game streaming on all of the devices without any delay. And it also protects you from any unauthorized access by using VPN and double firewall protection. 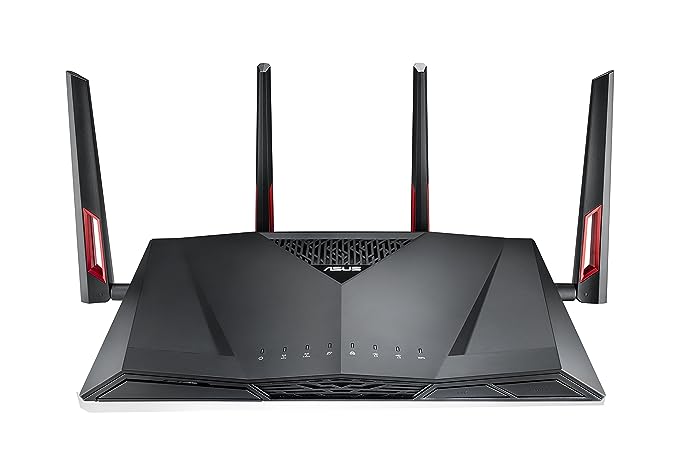 The gamers love this router because it has built-in game acceleration along with adaptive QoS(Quality of Service). What even more fabulous is that you can assign full dedicated bandwidth for gaming, making the perfect Wi-Fi routers for low latency gaming.

The security experts pick this routers because it comes with Ai Protection network security by Trend Micro, which is another reputed defense and security company. Not just it takes your Wi-Fi network security to the next level, but also it triple guards your privacy along with robust parental control.

In addition to tight security and game acceleration, this router is packed with AiMesh technology if you ever need mesh network to expand the area covered by wireless internet. 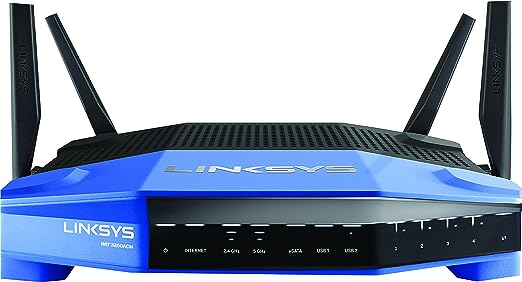 With the same looks on the outside, Linksys again brings another powerful wireless router in open-source capabilities. Along with MU-MIMO, this router handles 4K video streaming and gaming very well using the impressive TRI-STREAM 160 technology.

And, as usual, beamforming technology is also included with this router. Amazing smart Wi-Fi or smart website to enhance the capabilities where it is needed the most.

Google Wi-Fi System is one of most popular wireless mesh router on the market today. It is very easy to setup, and you will thank them for it.

A single point covers up to 1500 Sq. Ft so won't have to worry not getting Wi-Fi connections for large home or office. Not to mention, the cool and sleek look, which many consumers find appealing.

With 2.4Ghz and 5Ghz combination into a single band makes it even more useful because a lot of customers don't know the difference between 2.4Ghz and 5Ghz wireless band. And 4GB of eMMC flash memory, 512MB RAM, Quad-core Arm CPU makes as good on the inside as outside look. 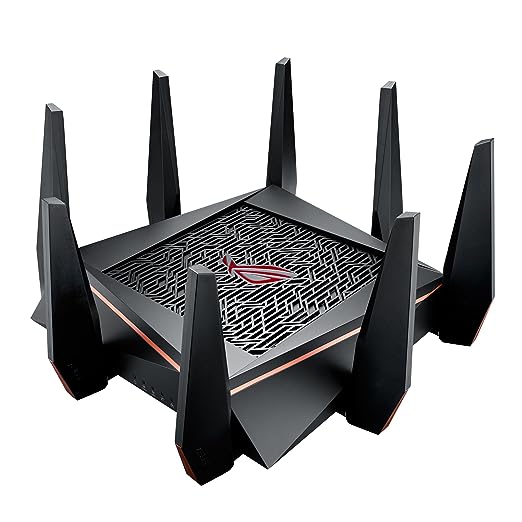 This Asus router needs no introduction. It is just accelerated Wi-Fi beast with combinations of hardware and software. It takes Asus routers to the next level to rule the network.

This router comes with a lot of security features so you won't have to privacy. And its CPU is PC grade making it a very powerful router without any doubt. Not to mention, its VPN fusion improvement takes the security to another level.

D-link's AC5300 is the ultimate Wi-Fi router with impressive wireless speed. 1000Mbps on 2.5Ghz and 2,167Mbps on each 5GHz, so it is safe to say that it is one of the fastest wireless routers out in the market now.

One feature that stands out from the rest of router is that it comes with DLNA to mirror your devices to the big screen whenever you want.

On top of that, unlike most of the routers out there, this router does support open source DD-WRT to get latest firmware updates to keep you secure. And its design is something many consumers appreciate. 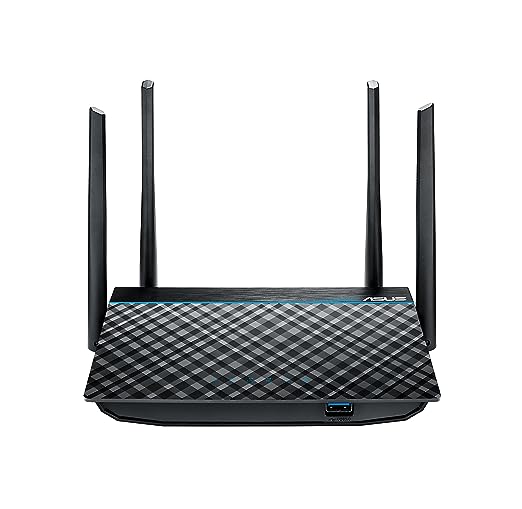 This Asus router in one of the most inexpensive router out there, yet it is powerful and has the latest technology to behind it. Not to mention, it is very easy to set up.

But let the price tag fool into thinking that it may not as good as other routers out there, but we would hate to burst your bubble because it is not simply true. For example, it has latest 2x2 MU-MIMO (multiple users - multiple inputs and multiple outputs), combining the speed of 1267Mbps, which is more than most of the ISP will offer, and USB 3.0 port. Only expensive routers provide these features.

The easy setup, four antennas, and intuitive router app won't make you feel any less expensive. Its 3.0 USB Port is something you will definitely appreciate.

Another great router from Linksys for mesh networking covering up to 6000 Sq. Ft. This powerful tri-band Wi-Fi system will cover you even to the furthest corner of your home or workplace without feeling the lag of Wi-Fi speed.

This router works with Amazon Alexa making a unique Wi-Fi router for your home. With just one word you can turn on or off you guest Wi-Fi. It also has auto-fix and device prioritize options so that your device get the most of the connections when needed the most.

MU-MIMO is the abbreviation of Multiple User Multiple Input and Multiple Output. MU-MIMO requires 802.11AC Wi-Fi technology. Regular router works by sending Wi-Fi signal everywhere simultaneously but connecting devices sequentially. On the other hand MU-MIMO router works by connecting multiple devices simultaneously and in the direction of connected devices instead of everywhere. For example, if you have two devices connected in your interent network, MU-MIMO router will pin-point the location of the devices and send signals to those devices instead of everywhere in the house. This way the router fetches the data quicker.

What do Single Band, Dual Band, or Tri-Band mean?

QoS is the abbreviation of Quality of Services. It prioritizes traffic to your devices based on classification such as video streaming, video chatting, or online gaming.

BEAMFORMING is a technology that sends internet traffic to the angle of your devices. Without BEAMFORMING, Wi-Fi router would send the data using 360 degree. As a result, by the time the data reaches your devies it loses the strength and sometimes even the data.

The above-mentioned routers are the best wireless routers in own category and features. Please note that most of the time wireless routers are packed with unnecessary features to boost the price range, but we have researched and found these routers are better than other routers out there. Wireless speed test was done using ten different devices from the distances of 5 feet, 15 feet, and 30 feet.